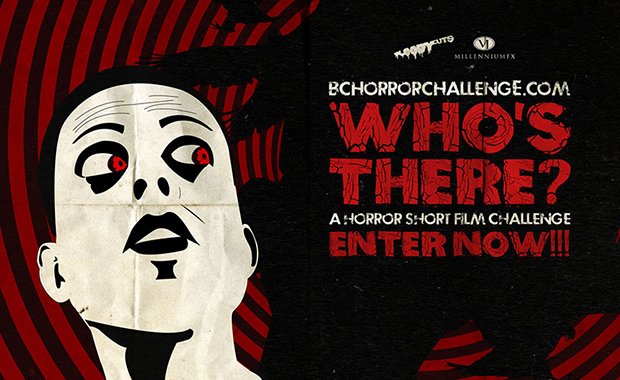 Deadline: 30 December 2013
Open to: international filmmakers aged 18 or above
Awards: over $9,500 in prizes for the winner; smaller prizes for runners-up

Bloody Cuts is a UK-based production company that have been busy creating an anthology of 13 short horror films. Their short films have played all over the world at festivals including Raindance, Texas Frightmare, LA Screamfest and Toronto After Dark, and have received over 750,000 views online so far.

This company is hosting its first horror film challenge – “Who’s There” – and inviting filmmakers around the world to enter.

Your film will be based around the open theme of “Who’s There” “Who’s there?” is the theme, but not the title of your short. You can interpret “Who’s There?” however you see fit – use your imaginations and surprise us. They also want you to aim for scares so make these films as terrifying as possible.

Entrants have to be 18 or above on 30 December 2013. The age restriction only applies to the person responsible for submitting the short, as some content and prizes will not be suitable for those under the age of 18. Therefore, minors can be involved in creating the short.

There are no restrictions relating to geographical location.

Bloody Cuts have teamed with dozens of sponsors from all over the film industry, who are giving away well over $12,000 worth of equipment, software, merchandise and more as prizes for the competition. There are also individual awards and prizes for directing, writing, grading and a variety of other technical skills.

The competition will close at 23:00 GMT on Monday 30 December 2013. Please download and thoroughly fill in the Download Submission Form (PDF FORMAT) and the Download Budget top sheet (PDF FORMAT). Any entries with forms not correctly or fully filled in will not be accepted. You can mail your application to submissions@bchorrorchallenge.com.

Films have to be created after 31 October 2013 and specifically for the “Who’s There” competition. All entries have to be submitted to YouTube and the short must be made public to be considered for the competition. Private entries will not be accepted. All submissions must be 3 minutes and under, not including Title Card. Any titles and / or credits must be included within the 3 minute running time. If a film is over 3 minutes and 5 seconds (including 5 second title card) it will not be considered for The Competition.

Send any questions to info@bchorrorchallenge.com and they’ll get back to you within 24 hours. For more information please visit the official website HERE.