According to research, the average cost of tuition for an in-state student at a public university in the United States has increased by 296% over the past 20 years. At the same time, wages in the U.S. have barely grown in that same time. College students are graduating with more debt than ever.

Statistics indicate that minority students often graduate with more debt than their peers.

Fortunately, federal grants and scholarships for minorities can significantly lighten the financial load for these students.

The U.S. Department of Education recently invested $96 million in grants to provide additional financial aid specifically for minority students. This grant funding will go directly to colleges and universities to help them provide better financial support to their minority populations.

Minority students who receive federal grants and loans to help finance their college educations often could use some additional funding to help them bridge financial gaps. Scholarships for minorities are of tremendous help to these students, but finding the right scholarships to apply to is not always an easy task. To help you in your search for additional funding, we have compiled a list of some of the top minority scholarships. Check on the link to find a detailed list of these scholarships, including eligibility requirements, deadlines, and information on how to apply.

European Network Remembrance and Solidarity is launching a recruitment process for an ongoing educational project called In Between?, which aims to encourage the young generation of Europeans to explore 20th-century history by speaking with those who lived it. Participants are given a unique opportunity to gain theoretical and practical experience in documenting oral stories.

The call is open to all candidates age 18-25, including students and freelancers representing various areas of interest that may include history, cultural anthropology, sociology and audiovisual arts, among others. After being selected, they will take part in interdisciplinary workshops (Summer Edition: 1-5 July , Autumn Edition: 13-17 September) and study visits (Summer Edition: 6-13 July, Autumn Edition: 18-25 September).

After 4-day workshops in Warsaw participants will have learned the theoretical basics of interview methodology, digital video-camera operation, photography, digitalisation of visual materials, archiving and historical context. Then, they will be divided into groups of six to travel to border towns and other localities for seven days. During their stay they will conduct and document interviews with local inhabitants. Recollections, sound and video recordings, photographs, letters as well as scanned documents and other items reflecting the daily life of the communities will constitute a basis for building accounts of their travel that will be shared with historical institutions and local archives, including the National Digital Archive and the Virtual Shtetl (Museum of the History of Polish Jews).

Recorded on family photographs and stories, collected documentary material reflecting the past of the eight European regions – with their cultural and historical complexities – will become the theme of a project closing conference. The event to be held in Berlin in December 2017 will feature debates with cultural anthropologists, historians and oral history researchers.

Factors to be considered in the recruitment process include a candidate’s motivation to participate in the project, openness and readiness to cooperate. Knowledge of English and one of the languages spoken in a selected region is a must.

To obtain the application form, The Rules Governing the Recruitment of Participants and any further information please visit: www.enrs.eu/inbetween or contact Ms Karolina Dziełak, In Between? Project Coordinator (e-mail: karolina.dzielak@enrs.eu and telephone: 0048 22 395 7610).

The Academy of Young Diplomats (AYD) is an annual diplomatic program for emerging young global leaders, preparing future diplomats, civil servants and social entrepreneurs for international careers in a spirit of responsibility for the surrounding world. Addressed to senior students and young graduates, the program offers, among others, 70-hours of hands-on diplomatic training, a special workshop session, study visits and one study-session outside of Warsaw. 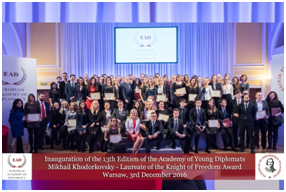 Since 2004 over 2200 participants from 50 countries have graduated from the Academy of Young Diplomats. Over 100 AYD Alumni found work in the Ministries of Foreign Affairs of their respective countries, while others are employed in European institutions, international organizations, public administration and business.

To read more about the program, please click here:

To apply, please check if you are eligible to apply and fill in the online APPLICATION FORM.

A number of scholarships will be awarded to best applicants:

In collaboration with the McGill Reasoning and Learning Lab, we are launching a 1 month Summer Lab that teaches technical concepts in machine learning, in addition to digital product development and design applied to a wicked social problem.

It is our belief that AI should drive innovation to address key societal challenges that impact the lives of millions of people. It is also our belief that AI research and product development needs to be more inclusive. This has motivated us to create opportunities for women to gain training, experience, and mentorship in machine learning techniques and product development at McGill University, and through our ecosystem partners in the Montreal technology and start-up community.

In order to be considered eligible to apply, you must fulfill all of the following criteria:

If you are selected you will be required to pay a small fee to confirm you spot.

Innovation@McGill, in collaboration with the McGill Reasoning and Learning Lab, is launching a 1 month Summer Lab that teaches technical concepts in machine learning, in addition to digital product development and design applied to a wicked social problem.

It is our belief that AI should drive innovation to address key societal challenges that impact the lives of millions of people.

It is also our belief that AI research and product development needs to be more inclusive. This has motivated us to create opportunities for women to gain training, experience, and mentorship in machine learning techniques and product development at McGill University, and through our ecosystem partners in the Montreal technology and start-up community.

In order to apply, register HERE.

If you have any questions, check the FAQ section or write to:  innovation@mcgill.ca.

The Aziz Foundation is currently offering the following scholarships for the academic year 2017-2018:

The Aziz Foundation is an independent grant-making body seeking to support the most disadvantaged communities in Britain. It aims to do this through supporting community empowerment, leadership development and greater public engagement in these communities, and greater public engagement by them in wider society. The Foundation seeks to support individuals and projects, strengthen organisations and networks, and help incubate innovative ideas that will ultimately improve the conditions in and for these sections of our society.

Applications close on Sunday 14 May 2017

One Masters Scholarship at the University of Oxford: Developing Public Policy Practitioners from British Muslim Communities.

Candidates from Europe and North America (EUNA) and from the Middle East and North Africa (MENA) can now apply until Sunday May 21st 2017 11:59pm EST to participate in the 2017 edition of the UNAOC Fellowship Program.

The theme of the Fellowship 2017 is “The role of civil society and the media in combatting hatred and fostering inclusion”.

To be selected, eligible candidates must demonstrate strong interest in intercultural dialogue and professional achievements in the fields of media and/or civil society.

The goal of the Fellowship is to provide participants with first hand exposure to cultural diversity, while interacting with a wide range of local actors and partners. In every country they visit, participants will acquire crucial comprehension tools to help them understand the plurality of their host country’s culture, politics, society, religion, and media.

Please note that ONLY shortlisted candidates will be contacted.